The system allows arranging audience polling. The flexibility of software options makes possible the adaptation the polling system to any show, seminar or conference.

Webvote is real-time system for real-time recording and analysis of audience opinions. 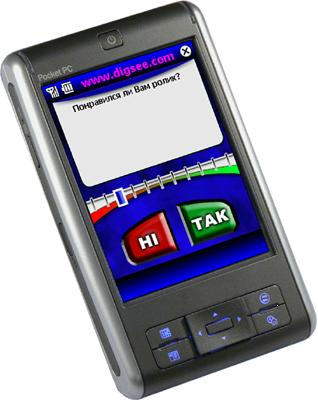 Probably, many people know TV shows like popular Ukrainian broadcast “Free Speech” by Savik Shuster and has an idea how the recording of audience opinions is arranged on similar shows. Listening to various statements, spectators are pressing buttons on special terminals expressing their positive or negative attitude towards what they hear in the current moment. This information is being consolidated, analysed and transmitted to the screen for presentation in easy-to-understand form.

DigSee company presents WebVote system allowing to perform the above collection and analysis of audience opinions in real-time mode on the base of almost any equipment: phones, tablets, laptops, special devices, etc.

WebVote system supports the audience polling reflecting the opinions on any materials – TV shows, public statements, video reels, etc. Additionally, this data may be collected both from spectators or listeners located directly at the place of polling, and from remote groups, including virtual ones – i.e., groups where its members are actually situated on significant distance from each other, even in different cities, regions or countries.

WebVote allows to remotely display the material (video, audio recordings) over the Internet. Spectator/listener may visit a certain webpage where he can replay the material by himself and, while perceiving it, express his opinion on what he see or listen to.

WebVote system adds the interactivity to the process of creation of media content, video reels, presentations, etc. WebVote ensures contact between media content creators ant their target audience both on the stage of material broadcasting and on the stage of its preparation. Media content may consist of video sequence, audio sequence or any other video and sound information.

Our system is universal and is not linked to some certain type of equipment. WebVote allows recording the data on respondent attitude towards material every second. The complex may be deployed:

There are three components in the complex structure:

OPTIMAL WAY TO IMPLEMENT THE SYSTEM:

WebVote system does not require significant time and money resources for its deployment and implementation. We have done our best to ultimately reduce this preliminary process and, to possible extent, avoid the necessity of most standard stages. WebVote system may be provided as remote service with minor subscriber’s fee – at the same time it is not required to purchase special equipment, hire the dedicated staff and spend much time for setting it up.

HOW THE SYSTEM WORKS:

Web server is installed to connect WebVote to LAN (optionally – to Internet). Then WebVote “controlling module” is launched via web browser where the video sequence for respondents (groups of respondents) is created, i.e. the list and order of reels is formed. Also the respontents are registered in the system (access passwords are entered and linked to certain persons). Respondent is watching the video sequence and expressing his attitude towards one or other moment – for example, by shifting the scroll bar over the scale from negative “minimum” to positive “maximum” (expression gradation from extremely negative to absolutely positive). Scroll bar has base position of “0” (i.e. neutral attitude). When changing his opinion on the current moment, respondent is shifting the slider of scroll bar to one or other side, and then the slider returns to base position. Also there is the option of several buttons present on the screen, which buttons allow to express persons’ opinion on the video reel. All the data on respondent’s attitude is recorded by WebVote web server in real-time mode.

WebVote system records the beginning of the session, its completion and respondents’ attitude in digital form with relation to certain respondent. When the session is over, system administrator performs the export of data array for in-depth analysis (in CSV format recognized by most analytical applications) to get the possibility to understand the respondents’ attitude towards each certain segment of the reel – with relation to certain respondent or to selected group of respondents (i.e., male audience, unemployed audience, etc.)